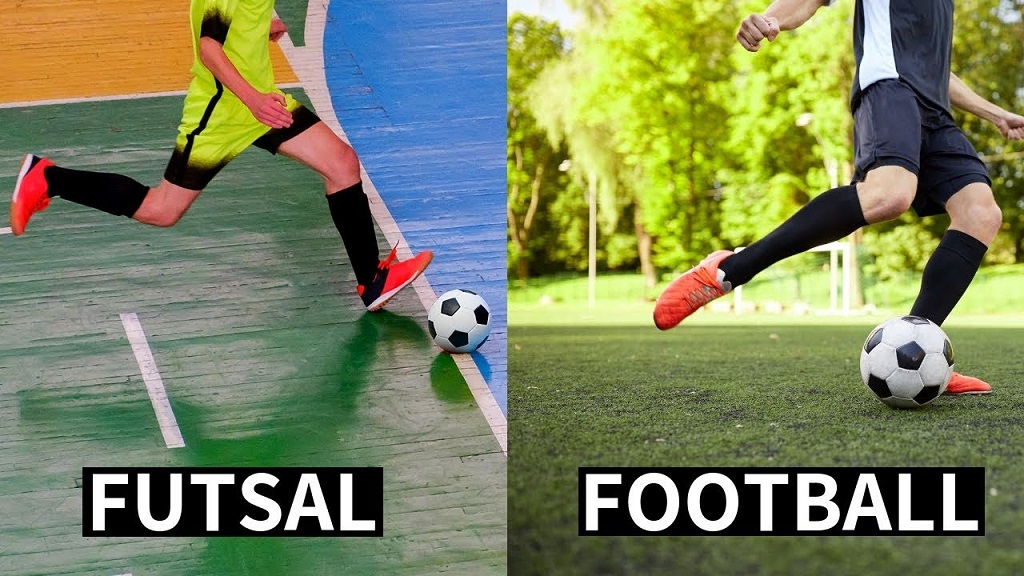 Most people perceive him as the little brother of soccer, thinking that it is the same, but in a more closed place. This perception must change between the two. There are enough differences to be considered different sports. Each of them has rules, equipment, a field, times, etc.

For starters, the two sports have a similar name, so, normally, they have things in common. In both, you play with a ball, two teams face each other on the field and the objective is to score goals in the opposing goal.

Both futsal and football follow the rules imposed by FIFA, the highest body in the world of football. For this, all those teams that wish to organize or play in official competitions must comply with the FIFA regulations. Although unofficially, matches and championships can also be organized, where the rules are implemented in a free or agreed manner.

The kit is the same, consisting of a shirt and shorts except, it is something in common. Each team wears specific colors to identify them on the playing field, both by the referees and by the fans.

In both, there are goals where a player, the goalkeeper, will try to stop the opposing team’s shots and thus avoid goals. Goalkeepers are the only players on the field who can touch or catch the ball with their hands, only within a defined area on the field of play. Outside of it, the goalkeeper becomes one more player and could only touch the ball with the feet or the head, like the rest of the players.

To further clarify these differences, we have collected a series of items that allow us to visualize and defend the independence of futsal:

One of the points in which futsal differs from conventional football is in the size of the field. The soccer playing field is larger than that of futsal. Being a smaller space in futsal, most of the differences have to do with this aspect.

Indoor soccer can be played both on outdoor pitches and on an indoor court. Conventional football is played on a grass or turf surface. Futsal can be played on various types of surfaces, although never grass.

If it is played in a covered field, there is a peculiarity. It is that if the ball touches the ceiling, the game is stopped and the game is kicked off the sideline. The service is made by the team that had the ball before it reached that high.

The duration of a soccer match is much longer since one of its two parts lasts longer than an entire futsal match. In futsal, matches last 40 minutes, with a 15-minute break between half and half. If the match is eliminated and has ended in a draw, at the end of this, a 10-minute extension will be played, divided into two halves.

In futsal, there are two types of penalties. If a player has been fouled within his area, a shot will be taken from the 6-meter line in front of the goal. If a team commits 5 fouls, the other penalty is awarded. It is taken from 10 meters.

Offside, one of the tactics most used in 11-a-side football, cannot be used in futsal because there is no such fault directly. This makes teams very alert and you should always have a player in your field to avoid problems in the counterattack.

In football, there are only 2 cards (red and yellow) while futsal has one more, the blue card, which takes the player out of the game for just a few minutes.

The soccer ball is larger and lighter than the futsal ball.

In football, you can only make 3 changes of players, while in futsal, you can make the changes you want.

Futsal coaches, as in basketball, may request a time-out. They have one minute in each half, as long as the ball is in their possession.

Speed, skill, and technique are more important in futsal than in soccer.

Futsal has defensive tactics different from those of football since in futsal, there is no off-field.

In soccer, it is mandatory to wear knee socks and in futsal not, although it is advisable to use them.

Football boots with studs on the sole are used in football and not in futsal. The futsal shoes have a smooth sole with great grip and adherence. Both shoes are different since the demands and the playing surfaces are very different.

In soccer, there are 4 referees, while in futsal, there are 3 referees.

As you have seen in the Futsal Vs Soccer, although they have a similar name, the reality is that they are two totally different sports.

You may also like to read, How to plan a football training session? 3 times in a Week

How to play soccer Step by step guideline

Are you thinking of learning how to play soccer? If so, there are a few…

Things To Make You Have What it Takes to Solve Riddles

When you use difficult riddles, they will be able to sharpen your mind and ensure…

Soccer Ball: Guide to choose the right one and how to use it?