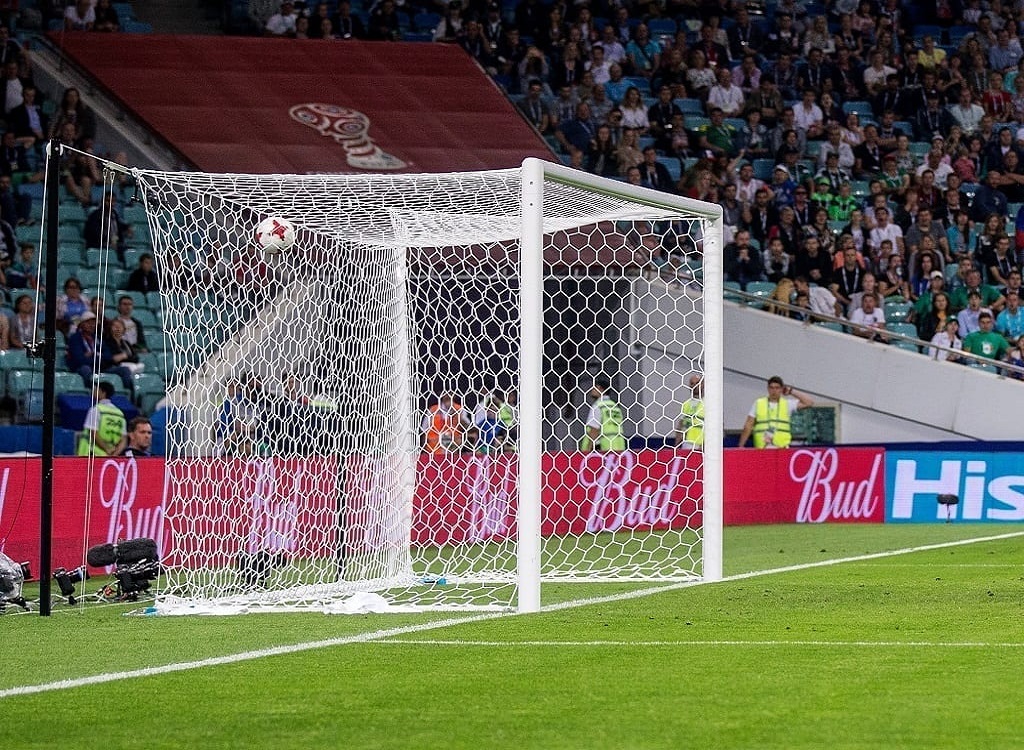 If you are a player or a great soccer fan, you will have noticed on many occasions that not all fields have the same measurements, and although it seems strange, it is something very normal. All teams decide within a range of meters stipulated by FIFA the dimensions of their playing fields, but where there is no difference is in the official measurements of a soccer goal or goal. If you wonder how long a soccer goal is professional, be attentive.

Unlike the dimensions of the fields, in which it is possible to play with a range of measurements, the soccer goals located on the field of play of any team must have the size established by the regulations. According to the regulations of the International Football Federation (FIFA) and the Royal Spanish Football Federation, the official size of a football goal consists of two vertical goalposts 2.44 meters high separated 7.32 meters from each other and joined by the upper part by a horizontal crossbar, also called a stringer.

The goal of any goalkeeper is formed by a space delimited by three white poles that are equidistant from the corner flags. Two parallel vertical goalposts and a top goal post also called a stringer or crossbar, that joins the two vertical goalposts, and which are normally made of steel or aluminum. The structure of a soccer goalpost is completed with square mesh soccer nets that cannot exceed 12 cm and with a diameter of the braid that must be at least 2 mm.

Other measures to take into account about soccer goal posts is that from the side it has to be 1.50 meters deep for fixed goalposts, the ones you see in any soccer stadium, or 80 centimeters deep in its upper zone and a maximum of 2.00 meters in its lower part for the portable soccer 11 players, which are the most used in sports centers or for training purposes.

Types of the soccer goalpost

In the market we can find goalposts of different qualities and finishes, we always recommend buying goalposts in companies of proven quality, it must be borne in mind that a goal post is equipment whose daily use far exceeds other equipment, moreover, by its nature, it is exposed to countless impacts. Therefore, it is better to invest in a quality product and thus increase the useful life of the sports facility.

If we focus on football itself, we can distinguish 2 types of clearly differentiated goal posts, fixed or anchored goalposts, and mobile goalposts.

Mobile goalposts are usually used for training sessions. It is the typical image where we see the players carry the goal post. As it is mobile, different configurations can be created within the same field. For example, bringing the goalposts closer together and thus simulating a pressure action brings the same players together in a smaller space.

We also find folding goalposts. These goalposts are usually installed on the sides of the fields and are usually deployed at the time of training and vice versa.

A traditional 11-a-side natural or artificial turf field for competition has 11-a-side in the back and mobile goalposts for specific training sessions.

A typical artificial grass 11 football field that we can find in any sports area of ​​our national panorama usually has its fixed goalposts in the 11 football backdrops. As a general rule, markings of 2 cross 7 football fields with their corresponding goalposts (fixed, mobile or folding).

The mobile goalposts have a rectangular base to support the structure, while the fixed ones will go on a concreted base that includes the anchor where the goal post profile is inserted.

Beach soccer goal posts also have a concrete base and futsal goalposts can be fixed or mobile, but they will always have an anti-tip system to prevent the goal post from falling on the user. In addition to the traditional ones, we can also find vandal-proof models, which are located in locations that by their nature may require a plus of “strength,” these models replace the nets with vandal-proof bars.

The goalposts must be firmly attached to the ground and their width cannot be greater than 12 centimeters, the lines that delimit the goalpost being the same size. A few years ago, the goalposts had elbows or lateral metal supports where the net was held, but FIFA advised not to use these to avoid the rebounds that occur in these supports and that can confuse the referee in a goal post play. It is still very common to see these goalposts in many amateur fields and fields of lower divisions, but in any field of the main leagues, two vertical goalposts are used behind the goal post and outside the field of play that allows to hold the net and prevent it from yielding by its weight.

You may also like to read, The 10 best English players of all time

Badminton racket: Which is the best in 2022?

Badminton, although it may seem strange to many, is the sixth most practiced sport in…